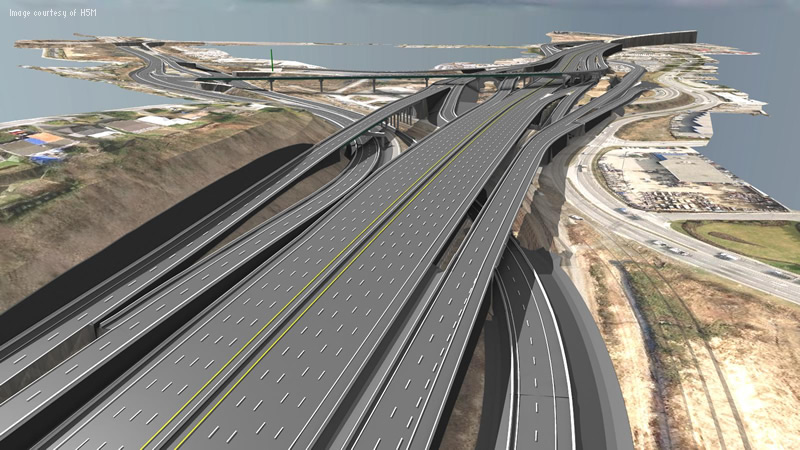 On Wednesday (January 25), B.C. transportation minister Blair Lekstrom once again announced the Evergreen SkyTrain line to Coquitlam and the Tri-Cities area. This time he announced the start of work after more than a decade of delays—well sort of. Only minor preparatory work is starting. No contracts for the actual transit line have been signed, and further delays are possible. The numerous delays to the Evergreen Line stand in marked contrast to the rapidly progressing work on the massive new Cape Horn freeway interchange connecting to the Tri-Cities.

The new Cape Horn Interchange and expanded Highway 1 freeway will provide a toll-free route for Coquitlam residents heading into Burnaby and Vancouver. Effectively, the B.C. government has spent $3.1 billion to convince people to drive instead of riding the $1.4 billion Evergreen Line. . . .

The big, untold reason for the failure to begin the Evergreen Line construction in earnest and actually sign a contract is the Canada Line, aka RAV.

Translink's newest "gas tax" increase brings its take at the pump to over double what it was just ten years ago, up to now 17 cents per litre.  This is the largest part of the reason why gas prices in the Metro Vancouver area are the highest in Canada, and by a lot.  The latest 2-cent rise was supposed to fully fund the Evergreen Line, and this indeed was exactly the justification for the increase.  But, yet, nothing is happening.  Why not?

A recent FOI uncovered that the Canada Line is sucking over $120 million out of Translink every year.  Its actual operating costs are roughly a tenth of this amount.  The rest, about $100 million, are what are termed "performance payments," which the provincial government stipulated would be turned over every year to repay the contractor for its financial participation in the P3 (public-private-partnership) that was the RAV project.  According to bank records, the RAV partners borrowed no more than $600 million to complete the line.  The amount may been less than $500 million, the gap between the authorized $1.5 billion paid by the government and the claimed $2 billion cost of the project.

Given the 30-year concession duration of this P3 RAV project, we can thus expect the presumed $500 million private sector contribution will be repaid at least 5 times over...that is if that $100 million per year does not increase.  It has been going up by nearly $10 million every year since the first year of payments in 2009.

If we deflate just a $100 million annual revenue stream to determine a net present value of this P3 public debt, we are still looking at a doubling of the supposed RAV price tag from $2 billion to $4 billion in today's dollars.  In nominal dollars, we will be paying well over $4.5 billion.  If you want to look at it in terms of an interest rate, the taxpayer is paying the RAV Line "investors" over 20% interest, per year and compounded.  Some deal!

The cost of the Evergreen Line is supposed to be roughly $1.2 billion, but it is clear why this recent gas tax and likely another one soon enough, and additional property taxes, and other governmental contributions will be needed first just to pay for RAV, and the likelihood of ever funding the Evergreen Line is decreasing every year as a mountain of P3 debt continues to crush Translink, and the taxpayer.

If you are waiting for a bus, whose service was reduced, and don't have enough money for the now more expensive fare, this is why.  It's pure graft.  Most everyone at Translink, especially the senior executives, drive to work.  They know better.

Read everything Eric Doherty writes.  You'll learn a lot about Transit policy, and how much better BC's should be.