Enough with the spring showers already!

Boy we are really paying for all that nice weather we had early in the month huh? Fortunately I have most of the big jobs I needed to do under control and I really need to spend the next 2 weeks studying for an exam anyway.

We participated in the 7th annual Blenheim Street Bazaar on Saturday with a yard sale and an "Open Coop." In spite of the terrible weather, we had a HUGE turnout... got rid of a lot of stuff and got a lot of people excited or at least curious about backyard chickens. 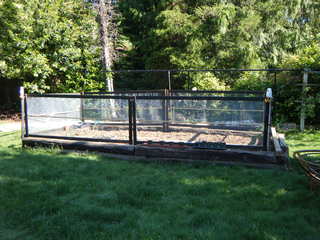 Ann Pacey is going to be sharing yard space with us here as we have a much larger, sunnier yard so she's been helping me get a nice new raised bed set up for our sun loving crops. We built an 8x16 foot bed with a nice tall fence around it to hopefully keep the raccoons, dogs and chickens out. Ann planted tomatoes, peppers, carrots, basil and some other stuff I've already forgotten while I built the fence and it's looking just great. 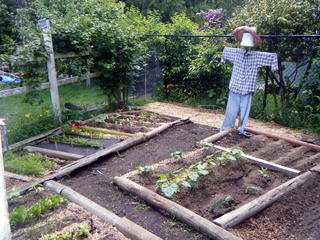 I finished building beds in the old veggie garden and still have lots of room in there if anyone needs some space.

We tilled the two weed jungles that were running along our two long fencelines. We've laid some old carpet down over the really bad one and covered it with compost so that will just sit there turning into great soil for next year. The other one will be the corn garden.

I dug out the front rose/weed garden and have it sitting under a thick layer of compost right now. There are a couple of rose bushes left if anyone wants to come dig them out.

Lots more going on but I need to get to work!

Comment by Julia Smith on June 4, 2010 at 8:14am
Hi Richard! I'm doing a BSc in Geology at UBC. We put the carpet down over an out of control weedy patch of the yard to kill the weeds so we can plant there next year. We'll roll it up this winter, cover the area with compost and have a great area to grow in the spring. We aren't allowed to have roosters in Vancouver. They make too much noise. All of our chicks are girls. It is difficult to tell the sex of chicks but some breeds are easier than others. Our Polish chicks were easy because the females have rounded feather tips. We also have some Buff Orpingtons that were sexed at the hatchery to 90% accuracy so we should be ok there. We're only keeping 3 of the chicks. We got some extras to pass on to friends and neighbours when they're older in order to cut down on the number of people driving out to the valley to pick up chickens and also because chicks that are hand raised make much better backyard chickens than farm raised. Buff Orpingtons are an excellent choice for backyard coops because they are one of the most friendly breeds, lay right through the winter, and are too heavy to fly so they'll stay out of the neighbour's yard. The garden of rose bushes is being turned into a veggie garden so if you know anyone who wants roses, send them my way.