Check out how to install a Solar Roof or how to reengineering your neighbourhood into a sustainable low energy, low carbon community with a combined farm and geothermal district energy system called Twin Harvest.

Some of the even BIGGER projects Village Vancouver volunteers are involved in creating, nurturing, or just volunteering to produce areVancouver’s long-running Car-Free Days (including our huge Sustainable Demonstration Village on Main Street), the first proposed Ciclovia, the Vancouver Underground Market, Tool-sharing Libraries across the city, Neighbourhood Composting, etc.

•To learn about how Vancouver’s Car-Free Day is created on a shoe-string budget and attract over 100,000 participants, watch an 11-minute movie created by a Village Vancouver member for the June 2008 Towards Carfree Cities Conference in Portland, the first time this global conference has ever been staged in North America. Organizing hundreds of volunteers, including many from Village Vancouver, could not be more valuable an effort.  Village Vancouver has also become the largest single exhibitor at this city-wide festival with the creation of theVV Demonstration Neighbourhood Transition Village at Main Street Car Free Day.  This is a must-see, futuristic stage for sustainable living, and an even better place to volunteer and/or show off your pet project or new green business idea or product.

•Read the Ciclovia proposal to the City from 2009 here..  This application was approved tentatively by Council but then cancelled by City Staff and subsequent efforts to revive it have failed repeatedly.

For a preview of this powerful and globally-popular civic renewal movement, consider the map below of English Bay and see one possible route for a car-free recreational renaissance. Imagine being able to cycle, walk, run, stroll, perambulate, rollerblade, rollerskate, skateboard, or scoot anywhere on this route on a summer Sunday morning and early afternoon with NO CHANCE of being hit by a car. Stop anywhere for a snack or a swim or a game of volleyball or just to watch the crowds, and imagine having NO PARKING PROBLEMS. You won’t, because you’ve left you car at home.

Sadly, City Staff pulled the plug on this project three months after it was proposed in the spring of 2009, and a month after Council had approved more than enough money to hold it.  We tried again in 2010, but again bureaucratic inhibitions and distractions rendered considerable volunteer efforts useless.  Again the project failed to materialize.  As of April 2011, car-free, cycling, and rollerblading activists--with thousands of collective hours invested in planning and promoting this concept--have not found the energy to re-engage.  Once burned, twice shy; twice burned, time to say good-bye.

It is a crying shame as now thousands of cities worldwide celebrate some type of Cyclovia on at least one day of the year, and that number continues to grow every year, exponentially.  Progressive cities are giving streets over to non-motorized uses not just for a part of one day once a year, but many are creating permanent pedestrian malls in and throughout their downtowns.  Vancouver appears too wedded to its cars to even consider a couple hours of time on even just one street to promote car-free mobility.

Perhaps YOU have some insights into how we can make this happen in Vancouver.  Join our planning team in the Transportation Group, and reignite the passion that is sweeping the globe. 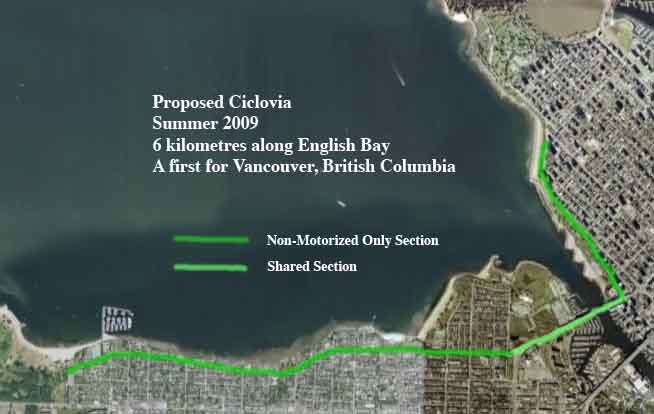 •The world is full of grants to do sustainable things, but explaining your vision in order to win a grant takes a little creativity. Check out this recent movie by a team of Vancouver elementary school students--with just a little help from a Village Vancouver Steering Committee member--which was produced for a grant application to build an eco-friendly greened recreational space.

You can contact Village Vancouver Board member Randy Chatterjee directly on his page regarding the realization of any dream you have that can SUSTAINABLY be put INTO SOME PHYSICAL FORM for the benefit of the earth or the people and animals and plants thereupon. Village Vancouver is about making dreams come true. Ideas are wonderful, but well-considered actions speak louder than idle thoughts and wishful thinking.

Village Vancouver has divided up its world, our world, into a half dozen project areas, ranging from grassroots organizing to large-scale municipal infrastructure development projects. In-between are educational workshops, local events, economic model-building, civic planning exercises, and demonstration projects that show how much each and every one of us can do to build low-carbon and highly-connected communities.

Each Working Group, with a group leader and project teams assigned to different categories of activities, proceeds relatively autonomously, following the principle of subsidiarity--decisionmaking pushed down to the lowest level possible. Fewer meetings and more results are what we strive to accomplish.

Interested in participating in a VV garden? We have collaborative gardens/garden spaces in 5 neighbourhoods. Contact us at gardening@villagevancouver.ca. Gardening resumes in February/March