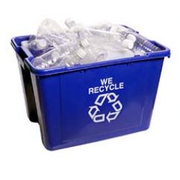 VV applies community organizing and asset development to waste reduction at all levels. Projects have included our partnership with the West End Neighbourhood Food Network, Recycling Alternative, and others on the 3x/week West End Food Scrap Drop Spots (2012-15), and currently, the monthly Kits Village Plastics Recycling Depot, now in its' 6th year.

from Malin: Hi all, since I have a newborn baby in my arms as we speak and since Ross is swamped with other things we have decided to postpone the recycling event until March. Likely 14 or 15. Stay…Continue

StyroFree Challenge was developed out of concern for the use of polystyrene in the food industry. The goal of this challenge is to divert restaurant waste from the landfill and promote environmental…Continue

Is there a page for zero waste resources ?

Has anyone gone to this place? http://thesoapdispensary.com/ Continue

This weekend (Oct 8-9): 4 Free and near Free Gardening workshops with Robin Wheeler

I've been in retirement for 10 years since this blog was active, growing carrots and dancing. Now I feel the pull to join a public conversation about waste again. What's on my mind?

What got me going was a visit from the roto-rooter, who informed me that our sewer was blocked by lint from our washing machine. He cleaned it out and the drain ran free, but I could see this was not a long-term solution.

We are a household of two since our kids left home 20 years ago and the cat died in 2015. But you would be amazed how much lint comes out of our washing machine. Surely, lint is an issue for the municipal liquid waste management system.

I devised a solution that captures the lint from our house before it goes down the pipe.

I went to the thrift store yesterday and brought home a couple of sheer curtains. I cut them up and stitched up the sides to form little bags, about one square foot in size. I fastened a bag to the pipe that carries water from the machine to the laundry sink. I used a sleeve clamp.

I made a prototype several months ago and it worked great. However it got clogged with lint that blocked it from flowing through the cloth. I emptied the lint out every once in a while in order to "re-use" the bag. From now on, I'll replace the bag when it gets clogged with lint. One panel of sheer curtain material ($5.49 minus the 30% senior discount) yielded 24 bags. I was lucky to find it in a dark plum color with a fanciful pattern of falling leaves.

Now I will begin a research project on lint. 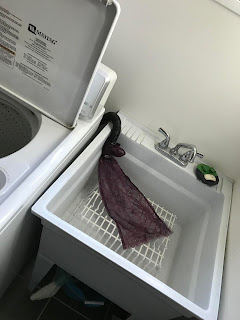 What the Waste to Energy Industry is Not Telling You

Webinar: Friday, May 30, 10:30 am – 12:00 pm
Please join us for this webinar where a panel of experts and public interest advocates will discuss the economic, environmental and public health risks posed by waste incineration, and the impacts felt by communities that have built them.

Metro Vancouver has a plan to build a new waste incinerator in BC. So far, three communities have been identified as potential sites (Delta, Nanaimo and Port Mellon) but six more sites are still to be announced.

There will be increasing pressure on these communities to accept the proposed incinerator, but the outcome is far from inevitable. In recent years, Powell River, Kamloops, Port Moody, Nanaimo and Christina Lake have all stopped proposals to burn waste in their communities.

Hosted by Zero Waste BC, Zero Waste Canada and the Global Alliance for Incinerator Alternatives, this webinar will feature guest speakers from Detroit, San Francisco and BC, speaking about the multiple risks posed by incinerators, as well as better waste management options for communities to consider.

If you wish to join the webinar, please RSVP Jenna Ralston at jenna@spakemedia.com by Tuesday, May 27th.
An email with webinar/call information will be sent to you, after you have responded. Also, please share this invitation with any colleagues or friends that may be interested.

Today I sat in on a meeting of the Sunshine Coast Regional District Board where MMBC's Allen Langdon was briefing the politicians about the new stewardship program for PPP (packaging and printed paper) which will be rolling out in 24 days.

The meeting was very tense, with the politicians struggling to articulate the many basic questions about the program that still have not been resolved -- like, what will it look like?

One question that came up: what is MMBC planning to do with the "residuals" -- non-recyclable materials that are collected in the program. Would they be burning those residuals in an incinerator? This was the allegation made by a well-known, award-winning local recycler, linking the MMBC program to Metro Vancouver's plan to build an incinerator, possibly right up the Sound in Port Mellon.

Langdon insisted that the recycler was "misinformed" and repeated several times that MMBC had no plan to incinerate residuals, but would be landfilling them instead.

It may be true that MMBC has no such plan at this time. However, they will be up against pressure coming from Metro Vancouver to force them to burn their residuals.

This is a component of Metro Vancouver's new solid waste management plan. Section 3.3.3 of Metro's plan, on page 26, says that the region will request the provincial government to develop "requirements for existing and future stewardship programs to use the non-recyclable portion of returned material as fuel rather than landfilling."

It may not be MMBC's plan at this time to burn residuals, but it clearly is Metro Vancouver's plan. And that plan has been approved by the province.

NOTE: In Europe, where the concept of producer responsibility for packaging was introduced in 1991, producers are obligated to achieve targets just as they are under our regulation. But the European directive was amended in 2003 so that the targets don't require recycling any more.

Is this where we're headed in BC, with Metro Vancouver's help?

You need to be a member of Zero Waste to add comments!

I salute you for the great work you guys have been doing on neighbourhood planning - particularly around land-use and zoning. I'm writing to ask you to be part of a conversation on the evening of Wednesday, March 2nd to talk about something different – but closely related.

Zero Waste Vancouver has been invited to host a 2-hour meeting, co-sponsored by the City through its Greenest City initiative, to look at the draft Zero Waste plan through a “neighbourhoods” lens. I leapt at the chance. Here’s a little background.

You may know that I have a long involvement both as a neighbourhood activist (Dunbar Residents Association, Neighbour-to-Neighbour) and as a recycling activist (Recycling Council of BC, Zero Waste Vancouver).  It is really satisfying to have these two issues converge at such a positive moment.

I am a fan of the Greenest City project. Two things appeal to me most. First is the recurrent theme of creating neighbourhood capacity, to build the Greenest City from the ground up. Waste happens in part because people don’t have options when they need them: composting in your apartment building, for instance. It also happens because of social isolation: we can’t find people down the street who could use something we have no further use for. The City is asking us to come up with specific Neighbourhood Zero Waste "Assets" that could encourage exchanges rather than discards, for instance, foster repair and stewardship rather than more consumption... reduce our waste and build more resilient, connected communities at the same time.

The second good thing about the Greenest City project is its synergistic approach. The plan is built around ten goals, and the goals are cross-linked. If we build the neighbourhood capacity we need to achieve the Zero Waste goal, that capacity will also support the achievement of other goals: more neighbourhood recycling businesses, for instance, will support the Green Economy goal as well as the Zero Waste goal. More composting of food scraps will support the Local Food goal. More recycling in condos and apartments will support the Green Buildings goal... In the course of building neighbourhood capacity in one area, we build it in all areas and become a resilient Green City with deep roots. Ultimately, this will be given expression in new land-use and zoning policies that support a livable city.

I really hope you will come be part of this conversation on March 2nd. We need your insights. Let me know if you are interested and I will send more details.


To confirm attendance, please contact:
Olive Dempsey
olive.dempsey@vancouver.ca
604-873-7264.RSVP by February 25, 2011
A light dinner will be provided at the event

Comment by Mairi Welman on April 30, 2010 at 10:34am
Anyone interested in zero waste?
RCBC is holding its 36th annual conference during the last week of May this year, in Whistler.
Rex Weyler is the keynote and session topics range from approaches to multi-family residential waste reduction to the premiere screening of the new documentary film, The Clean Bin Project.
For more info www.rcbc.bc.ca/events/annual-conference