Sip Lattés and Fix Busted Stuff at the Repair Café

It says something about where we’ve come as a society that the simple act of fixing something that’s broken is considered a revolutionary act. Yet here we are. It’s cheaper and easier to buy a new toaster, lamp, printer, or chair than it is to mend the one you have when it breaks — never mind that you may already be jonesing for an upgrade.

For 80 years or so, planned obsolescence has been the dirty little engine that drives our consumer economy. Today the members of a nascent fixer movement say it’s been long enough.

In 2010 in the Netherlands, disgust with Europe’s throw-away culture led former journalist and new mom Martine Postma to stage the first Repair Café, an event where members of the community could drop by with defunct items they would otherwise have thrown away, and have them repaired free of charge by volunteer fix-it experts.

Since then, Postma’s concept has thrived. Almost 40 groups across the Netherlands have started their own Repair Cafés to date, and the Repair Café Foundation has brought in over $500,000 from the Dutch government and other sources to support its operations.
In addition to fixing what’s broken, the collective encourages acts of creative transformation

Held in community centers, auditoriums, and coworking spaces, Repair Cafés are practical but also social events. Part of the mission is teaching repair skills, which are lost quickly, so people who bring in broken items are asked to be active participants in their repair. People with nothing to fix can enjoy a cup of coffee and read from a selection of DIY books — or just watch as fixers try their best with an assortment of broken bicycles, kettles, printers, toys, holey sweaters, fritzing hair dryers, and lightless lamps.

The Repair Café foundation makes information available to groups in the Netherlands who want to start their own Repair Cafés, and it’s working on translating the material for the use of groups in other countries, including the United States. But a few stateside groups have already coalesced around the environmental — and social — benefits of fixing.

The New York City-based Fixers Collective has been holding events since 2008 — like the Repair Cafés of the Netherlands, it was an offshoot of an art installation based on the idea of mending — at Proteus Gowanus, a sprawling gallery and reading room in Brooklyn. Tamara Pittman, a cofounder of Fixers Collective, called the project “a reaction to the economic downturn that had just happened.”

But the Collective has thrived in (slightly) better economic times. Typically, its monthly meetings attract 10 to 15 visitors with broken goods.

Pittman said that over the years, finding skilled fixers to staff the meetings hasn’t been a problem. “More people come in who are good at fixing things than people who have something to fix,” she explained. Different regulars have different areas of expertise, with electronics, computers, sewing, and woodworking all covered.

In addition to fixing what’s broken, the collective encourages acts of creative transformation — “you know, like, ‘I wanna take my high heels and make them into flats, or turn my salad spinner into a lampshade,’” Pittman said. “Some very creative fixes have been invented around that table.”

Hendrik! (et all) have an event coming up on Oct 23 from 11-2 at Gordon Neighbourhood House! here is the fb link 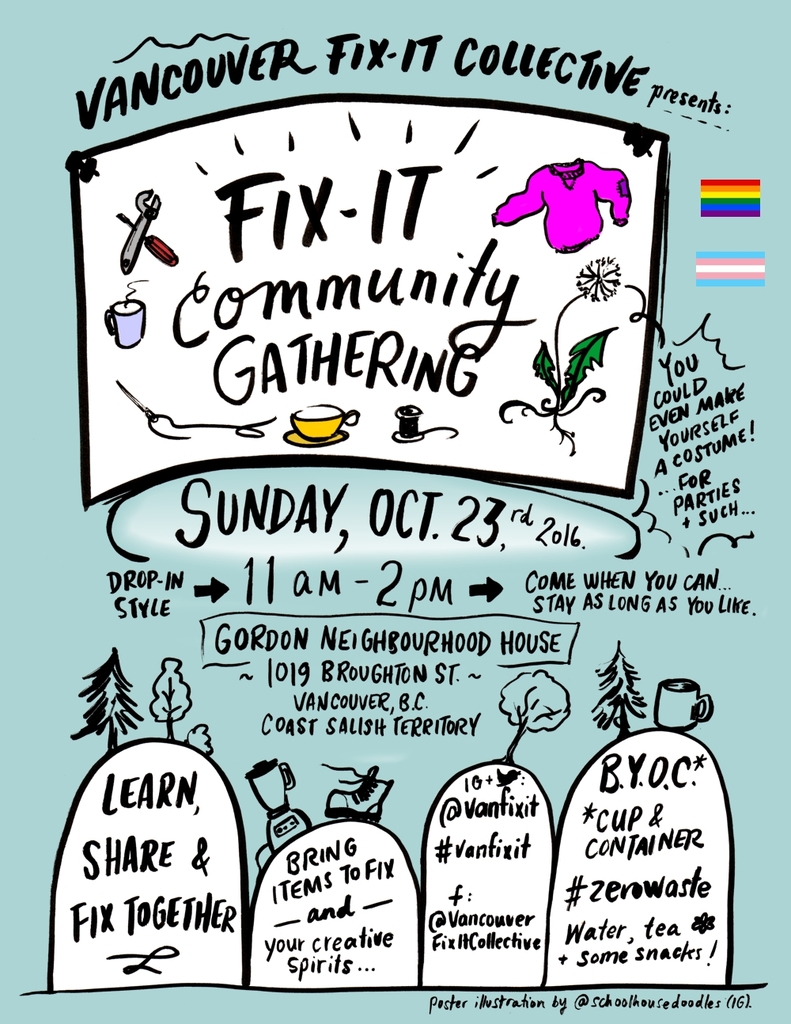 I can help with translating from Dutch, if you need it!
I am fluent in both Dutch and English: call me the language fixer, haha!
Do you still have repair cafe's going on?
I am a great fan and also have books on how to fix things and some practical experience building and repairing things as well. Let me know about the next one please, or if you don't have plans for a next one, let's plan a next one!

Comment by Keltie Craig on January 9, 2015 at 8:57pm
They are hosting one in Victoria in Feb at the library. I don't want to take on organizing this personally, but i don't mind helping make connections to people, etc if you want to follow up on them. And yes let's keep in touch this moves forward. I have some ideas about resources and groups - send me a note if you like keltiecraig at gmail dot com

Awesome Keltie! I am definitely moving forward with this. I am currently enrolled in Groundswell and this is what I'd like my project to be focused on....thinking a fix-it/maker collective like the one in West Seattle...very inspiring stuff. We are also thinking of a fix-it festival in the summer when it's warmer out. What kind of involvement would you like to have in this? I'm happy to include you to whatever extent you'd like. And great that your husband loves fixing stuff...we definitely people like that! :)

Comment by Keltie Craig on January 9, 2015 at 1:15pm
My husbsnd and i were just talking about this. He loves fixing stuff. Let me know if you are moving forward with anything on this

Awesome! I am currently looking to start one of these on a regular basis...will keep you guys posted! Not sure if you check this since it was posted a while ago now so I've added you as a friend, and sent a message in that request too so you knew who I was!! :) Let's stay in touch, and if you'd like to be involved in the event planning/organization, that would be fabulous!!

I would love to help set up a Repair Cafe in Vancouver, please let me know of any plans for this. Vancouver needs one.

I'm interested in implementing this in the Vancouver area. Any ideas to get us started, Beth? I'd be happy to discuss by phone/email.

I really like this idea -- I grew up in a family where we always fixed things. Now my brother is needing some help fixing his transmission. Anyone know someone out there who could help?