THE END OF THE LINE FOR THE DOWNTOWN HISTORIC RAILWAY?

The City of Vancouver has decided to cut the budget for operation the Downtown Historic Railway.

What is the DHR ?

Beginning in 1997, the railway was operated on weekends and holidays from mid-May to mid-October between Science World (now Telus World of Science) and Granville Island.  The line operated with NO advertising budget and NO payroll--all the operators were members of the Transit Museum Society, who actually payed in order to provide their skilled services to the City at no cost to the public.  The revenues collected from the tickets sold essentially paid for the power to run the trams--less than that of a modern trolley bus!

Why is this significant?

Under the current Mayor and Council, issues of sustainability and "green" mobility within the City have taken a prominent role.  The two-fold purpose of the DHR was to (1) present a "living museum" allowing people to experience an aspect of the past, while also (2) demonstrating the potential of sustainable transit.

Why should Village Vancouver people care about this?

From the 1890s up 'till the 1950s, Vancouver had an amazing transit system.  Clean, green and efficient, the network of streetcar lines operated by the B.C. Electric railway built the foundations of Vancouver as a sustainable city.  All of our major streets were engineered with gradients designed for light rail transit and achieved the enviable goal of making reliable transit available within four blocks everywhere in the City.  Until 1952, you could take a trolley car all the way to New Westminster--where SkyTrain goes now, or to Richmond--where the Canada Line goes, and even all the way to Chilliwack!

The reintroduction of streetcars to the city means truly accessible transit for all.  Streetcars offer the capacity to carry strollers, wheelchairs, scooters and bicycles comfortably.  That would make the controversial bike lanes more accessible to cyclists who can't cycle 5 or 10 km--older and younger people, especially.

As the population ages, sustainable mobility will become a serious issue.  Connecting our 'villages' together in the post-peak oil era will be more challenging.  If we are to have a clear vision of the future, we need to look at the past to see what we did right back then.  The freeways were stopped back in the 1970s, and that was a real victory for the people, but only 20 years before, not enough public support could stop all the city streetcars from being burned under the Burrard St. Bridge.

How can V.V. folks voice an opinion?

Email our Mayor and Council (mayorandcouncil@vancouver.ca ) and ask them "Where are our trams?"

Also, check out a new site (they're on Facebook, too) called PlaceSpeak.  This is a new geolocational survey site which determines where a respondent lives so that large groups (such as corporations or political parties ) cannot skew legitimate surveys.  Make sure to register, and take the Streetcars 2050 survey.  There are also surveys that deal with urban planning and other issues undoubtedly of interest to V.V. folks.  Does anyone pay attention to the survey results?  Oh yes.  Politicians are looking keenly at these, because the smarter ones know that this is the beginning of real participatory democracy. 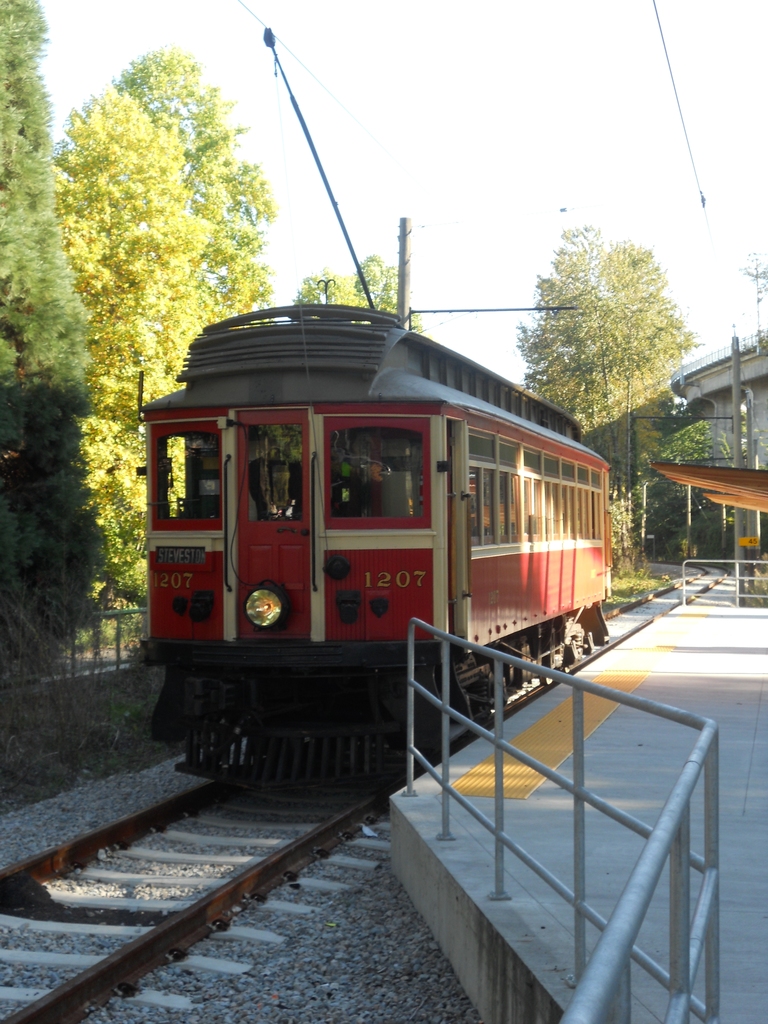 I love the text color in this post, but it is not nearly as beautiful as the the red #1207 pictured above.

Heritage is not always so strikingly beautiful, but it is also a hopefully constant reminder of what we once did so well.  Vancouver was a streetcar city, and we have so much to thank for the form of development that followed those tracks, all over and through our neighbourhoods and the entire Lower Mainland.  The streetcar city gave us walkable neighbourhoods, at least where they still exist.  Modern development has sadly already deprived many of a "complete community" and a once healthy way of life.

Since those days of universally hydroelectrically-powered transit, our carbon footprints have exploded thousandfold, and the earth's and humanity's future now hangs in the balance.  Our children will not only not live as long as we will, but their general health, quality and standard of living will most certainly be lower.  Most of their natural ecosystems will be so compromised as to be lost forever.

This train and the tracks upon which it travels, upgraded with millions of our taxpayer dollars just a few years ago, are both a symbol of a glorious past and a reminder of a future we must grasp and hold tightly.  This train is our only ride forward into a future for our ourselves, our children, and all of humanity.

A flood of email to mayorandcouncil@vancouver.ca is just the first step, but take it now.  Save our planet along with our democracy.

Thanks for your words of support, Randy.  I'm hoping that V.V. folks will see this as a rallying point: it's an issue that requires more people power than economic clout, and one that could significantly enhance our collective desire to steer Vancouver toward a better future.
For those who want a bit of background info., you might find the notes below to be of interest.

Other reasons why the City's budget cut means a permanent end to the DHR:

(1) While Car #1231 is owned by TransLink, Car #1207 is owned by an American.  He gets a small revenue from the operation of the car, but if he is receiving none at all, he may very well opt to take #1207 back to Washington State.  Theoretically, Heritage Canada can forbid the removal of significant historical artifacts, but realistically, in the present political environment, that would be very unlikely.

(2) All of the crew who operated the DHR during 2011 were qualified by Bombardier for the 2010 Olympics.  A physical exam is required, and a Rules Test is administered under the Railway Act.  These qualifications are good for 3 years.  If the City does not change its mind and operate the DHR this year, there will be nobody qualified to run it next year--and it would be hard to imagine that the City would want to pay to get crews qualified for next year if they won't pay to operate the line this year.

(3)  Promises, promises...  When the tracks were torn up between Quebec St. and Cambie St. for the building of the Olympic Village, there was a commitment made to replace them afterward.  True, the rest of the line was upgraded for use during the 2010 Winter Olympics, but the part torn up was never replaced.  The cost of the upgrade was about $8 Million, which is actually a good investment (IF it is used!), but that quality of track is not required for the section between Cambie and Quebec.  Cost: according to PNR (rail installation specialists), about $1 Million.
If there is nobody to bug City Council about this promise, perhaps they think it will go away.  The thing is, Vancouver taxpayers ended up footing some of the costs (and losses) attached to the Olympic Village, which was designed--and this was a selling point--with a streetcar line down 1st Ave.

Historical Significance:
Car #1207 is particularly significant because it is the only survivor of a class of a dozen similar vehicles that were built in New Westminster by local craftsmen between 1904 and 1907.  Of the scores of city streetcars and interurbans built at New West, and at the Kits shops (under the Burrard Bridge) there are only 3 survivors: Car #53 at the Old Spaghetti Factory (complete but needs restoration), Car #1207, and Car #1304, repatriated a couple of years ago by the Fraser Valley Heritage Railway Society.  #1304 (the car outfitted for the Duke of Connaught's visit to BC in 1910) is slated to be completely restored and operative in about 4 years' time.

Of particular interest to eco- / ploitical / urban historians,  while there seems not to have been a conspiracy in Canada to kill the streetcar in the 1940s, it was none-the-less a condition imposed by bus builders (particularly GM) that the streetcars they were replacing were to be burned.