The Future of Social Housing in Vancouver - A Roundtable Discussion 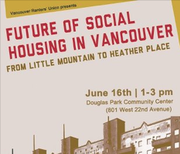 In the midst of an unprecedented housing crisis, Vancouver is at risk of losing Heather Place, a community in central Vancouver housing more than two hundred residents and families. To quote a long-time resident, “Heather Place is a community to be proud of, an example of how people can and should live.”

Unfortunately, instead of investing in needed repairs, the municipal government has identified Heather Place as a site for condo development. New “replacement” housing will cost more than twice the current rents. Project leaders like Geoff Meggs and Don Littleford have been vocal advocates for the path of gentrification, despite continual lip service paid to Vancouver’s housing crisis.

Luckily, it is not too late to stop the destruction of the Heather Place community. The goal of this roundtable is to provide some of the background facts and context needed to help save Heather Place:

• Unpack the unfolding situation at Heather Place, especially the impact of gentrification and redevelopment on low-income tenants.
• Draw lessons from the recent past: the destruction of the Little Mountain community and the false promises at the Olympic Village.
• Provide an overview of how old lines of public funding, won through the housing struggles of previous generations, are rapidly disappearing.
• Look to models in other parts of the world with robust public housing programs.

To save Heather Place and develop new alternatives, tenants cannot sit back and rely on the goodwill of governments and planners. We’ve gone two decades without a national housing program, while other levels of government have succeeded in a game of “passing the buck.”

Local governments have taken the withdrawal of federal funding as a license for a reckless agenda of further privatization and neoliberal entrenchment. Politicians from all parties have pursued the demolition of public housing, using a war chest of planning tools to encourage the gentrification of Vancouver’s most affordable neighbourhoods.

In the face of the dramatic failure of private partnerships, broken promises, ineffective advocacy and timid lobbying, the alternative is found in renters themselves, the only group capable of organizing against the exploitative rent economy and its endless corrupt governments. Tenant empowerment and education is the starting point for a new step in the collective struggle for housing justice in the 21st century.

Samantha Loo is now a member of Village Vancouver
Jun 17
Welcome Them!

Daniella updated their profile
May 3